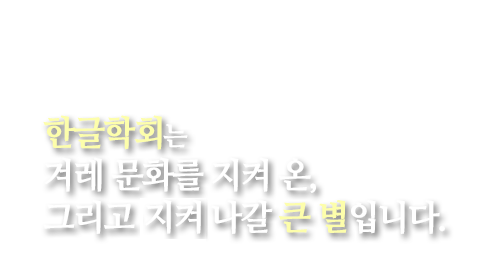 The Activities during the Japanese Colonial Era

Since the early years, the Society’s activities have aimed at stirring up the people’s national awareness through the preservation, study, and dissemination of the Korean language and script. This was especially true of the period under Japanese colonial rule.

In 1926, which marked the 8th sexagenary cycle (480th anniversary) of the proclamation of the Correct Sounds for the Instruction of the People (Hunmin Jeong-eum), the original name of Hangeul, September 29 (lunar calendar) was established as “Gagya Day” (Gagya-nal) and a commemorative festival was held, thus becoming the origin of Hangeul Day (Hangeul-lal). On Hangeul Day in 1929, the Society organized the Korean Dictionary Compilation Committee (Joseoneo Sajeon Pyeonchanhoe) and started the compilation of a Korean dictionary, the first fruit of which was the Unified Korean Orthography (Hangeul Matchumbeop Tong-iran), proclaimed and published on Hangeul Day in 1933. Created after approximately three years of work, this became the root of Korean orthography. On Hangeul Day in 1936, standard words hitherto reviewed were gathered and published in a book form as the Collection of Assessed Standard Korean Words (Sajeonghan Joseoneo Pyojunmal Moeum). In 1941, the Society completed and published the Unified Loanword Notation (Oerae-eo Pyogibeop Tong-iran), which had been separately shelved during the creation of the Unified Korean Orthography and which was necessary for unifying the phonetic representation of foreign personal and place names. Through such processes, the dictionary compilation project gained momentum so that approximately one-third of the manuscript was completed, with the typesetting of the first half initiated in spring 1942.

In addition to the dictionary compilation project above, the Society proceeded with the Hangeul illiteracy eradication movement and the Hangeul orthography dissemination movement, and the publication of the journal Hangeul and research presentations continued without interruption. However, the Japanese colonial authorities arrested or indicted all major figures of the Society in autumn 1942. From among them, Yi Yun-jae (1888-1943) and Han Jing (1886-1944) died in prison, unable to withstand the torture and cold. Called the Korean Language Society Persecution, this incident led to the suspension of all of the Society’s activities including the compilation of the dictionary for three years, until the Liberation.